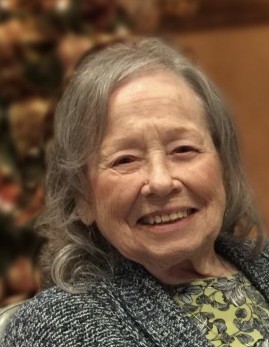 Lois Nelson James Burns — daughter of Walter and Martha James, mother, grandmother, sister, aunt, fierce friend, and force of nature—left this life on Friday, June 4th, 2021 of natural causes. She passed away peacefully just after spending time with family, and was comfortable and happy. We should all be so lucky.

Lois grew up on a cotton plantation in Mississippi in the 1930s and 1940s with her two brothers and four sisters. She had many stories that she loved to tell about that time. When she wasn’t rescuing baby foxes or snakes, she was spending time with the farmhands listening to their stories and singing songs with them around their campfires, or sneaking cookies out to German prisoners of war during WWII who were working on the levees near the farm.

As a child, she quickly learned piano, and in fact had her first recital when she was just three years old. It was discovered shortly afterward that she had perfect pitch, and a natural ear for music. She played throughout her entire life, passing along her abilities and appreciation to all her children. She had a passion for the classical greats, with Beethoven being her favorite.

In addition to two marriages and six children (and many adventures with each), she put her whole self into helping with the civil rights movement in the 60s and 70s after attending college in Mississippi. Relocating to several different cities—from the countryside in Alabama, to the beach in Georgia, to the mountains—and finally ending up in Atlanta, she attended marches and protests, and fought for the rights of the underprivileged and oppressed in any way she could. This took her to many gatherings all over the country, and allowed her to create helpful programs that no-one else seemed to be able to pull off. It was through these designs that she put into place through her work (a private non-profit that helped people gain skills for employment), that she was able to make a difference in literally thousands of people’s lives.

After a 50-year career in civil rights, she finally fulfilled her long-time dream of owning a cabin on the side of an Appalachian mountain, which she moved to with her chocolate lab soulmate, Chief. She became very involved with the Native American community in the Southeast, and earned the name "Seeking Bear" from the elders that she came to know. Even as she moved into assisted living, she continued to help people in need wherever she could, and made many lasting friends throughout this time who became family to her.

She led a long and storied life, and she loved to laugh and visit and share the many experiences that she had. Volumes could be filled trying to describe them all. She will be greatly missed, yet she will be carried forward in our lives and values, and in the stories that will get conveyed about her by family and the many admirers she gained while being her best self.

Service details to be announced.

Scott Huskins Funeral & Cremation Services is in charge of the arrangements | 678-771-5566 | scotthuskins.com

Plant a tree in memory of Lois by clicking here.
To send flowers to Lois' family, please visit our floral store.

A service summary is not available

Plant a tree in memory of Lois
An environmentally-friendly option

Plant a tree in memory of Lois

8 trees planted in memory of Lois

As a tribute to your amazing Mother.
Donna Smith

With loving memories of Lois, better know to us as Tat. We’ve laughed and laughed over the years, and cried some, Her sunny smile, ready laugh and genuine thoughtfulness are memories we cherish.
Maude, Nellie, Nancy, and Nelson

A Memorial Tree was ordered in memory of Lois Burns by Maude, Nellie, Nancy, and Nelson.  Plant a Tree

Love Lois so much!  Such a joy to know her.  I know she is singing with the other angels.

What a great lady. It was a pleasure getting to know her throughout the years.  She was an inspiration to many and will surely be missed.

Plant a tree in memory of Lois